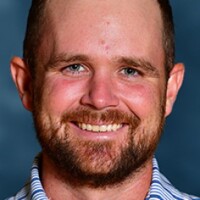 A native of Bethany Beach DE, Tommy Ellison moved to Northern DE in 2005 to attend University of Delaware. He received his bachelor’s degree while playing 4 years on the Men’s Varsity Golf Team where he served as team captain and earned MVP honors.

Following college, Tommy turned pro in 2009 and began his coaching and teaching career. Tommy worked at Sussex Pines Country Club and Brandywine Country Club before joining the Ed Oliver Golf Club staff. During this time, he also spent 8 years coaching at the University of Delaware (2010-17), and then moved on to coach at Goldey-Beacom College (2017-Present).

Tommy also continues to compete professionally in local and section events. His best career finish came after tying for first in regulation at the Burlington Open in 2012. He was defeated on the 5th playoff hole and took home a solo second. Tommy has also advanced into US Open Sectional Qualifying three times, and still dreams of one day making it the finals!